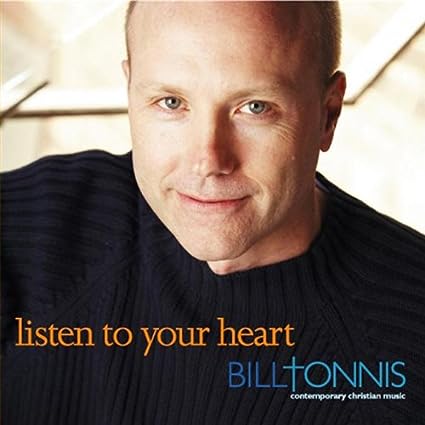 Today I would like to introduce you to singer-songwriter Bill Tonnis.  I am so grateful for Bill and others who are writing and singing such beautiful music while spreading their inspiring spiritual message.

Bill has graciously agreed to “chat” with me a bit and answer a few questions.  Thank you so much for doing this Bill.

I know that in addition to being a singer – songwriter, you are a fully trained chaplain, retreat presenter, former Youth Minister and former radio news anchor. That’s quite a leap — from news anchor to your ministry. Tell us a little bit about how you came to be where you are today.

(Bill) Well…I could actually write a whole book to answer this! Let me try to give you the “abridged” version. Somewhere along the line of me being a radio news anchor and reporter in Cincinnati…I realized that this could not go on for the rest of my life. There was a growing discontent…which expanded into a full-blown misery. The trouble was…being a “radio news anchor” was all I wanted to be from college. So the question was: If I’m not “Bill Tonnis the radio news anchor”…then who am I?

On top of that…I was actually really good at what I did…and listeners would routinely tell me how much they enjoyed listening to me! It was one of the most listened to stations in town…the one that broadcasted the Reds and Bengals. But the more I wrestled with my inner turmoil…the more I realized that delivering bad news on the radio was not what I was intended to do. At least not any more.

All my attempts within radio to make changes…like doing more entertainment-type reporting, doing movie reviews, etc. did not change my inner misery. Then in March of 1997, an almost biblical event occurred: A record flooding of the Ohio River! I was sent out by the News Director to report from sites along the river for an entire week while the flood remained…wreaking havoc for many who lived along its banks. It was the “coup de grace” you might say. I came home after an exhausting week of long hours reporting misery upon misery…and I sank into my couch in total surrender. I literally cried out to God, “I give up.” And it was in the silence of my surrender that I heard a small voice in my heart say, “Get your guitar.”

Now this made no sense as I had not even touched my guitar in probably ten years. And I hadn’t really played it much since I was a boy. I had more or less stopped playing after grade school…succumbing to the belief that I wasn’t as good as other kids who played…and how could my guitar playing ever “get me anywhere” in the world?

But the voice was clear…and so I went to my bedroom and opened a dusty guitar case that contained my boyhood guitar…and I began to tinker around with it. I even started to write a song about the flood. I had only written two songs in my life, both to a girlfriend, first in high school and then in college. Now, at the age of 37 in 1997, I started feeling an inner “yes” to what I had so many years earlier had said “no” to.

The songs started coming…slowly but surely. It was a work in progress. Eventually they became prayer put to music. Song lyrics…melodies…would come like little gifts to unwrap. I had already been re-examining my Catholic faith for the last several years…reading all kinds of books. I had been struck by a scripture in which Jesus asked his followers, “Who do you say I am?” I suddenly felt that the question was personal. My quest to figure out the answer led me back to school. I started taking classes on the weekends at the College of Mount St. Joseph (now known as Mount St. Joseph University) in 2000…and in 2004 I had earned a Master’s degree in Religious and Pastoral Studies. I had a new dream of being a Youth Minister so that I could help young people in their quests to find a purpose in life. Meanwhile, I continued working in radio.

In 1999, I had joined a contemporary Christian band that played at a local Catholic Church. How it happened is another story for another time. But in 2003, the band put out an album with three of my original songs, including the title song, “What Kind of Love?” Soon my friends were telling me to do my own album. In 2007, I released my first album titled Listen to Your Heart. In the summer of ’07, I interviewed for a Youth Minister job at a local parish…and to my surprise I was offered the job! I shocked a LOT of people when I told them I was leaving my successful news anchor job…for youth ministry.

The next five years were difficult…but more rewarding than any other time of my life! Then amidst this calling…came a new one: chaplaincy. That is also another story for another time…but it all involves listening to the movements of my heart or soul or inner spirit…whatever you want to call it. I had been practicing “contemplative prayer”…sitting in silence…also Lectio Divina…where you read scripture and mull over a word or phrase that strikes your heart. These practices were instrumental in helping me make decisions.

So following album number two that I released in 2009 titled Live to Love, in 2012 I began my studies in Clinical Pastoral Education (CPE) at Good Samaritan Hospital here in Cincinnati. There are four units of 400 hours each, 300 in clinical visits and 100 in class, plus 8 overnights on-call per unit. Those are where you are the overnight chaplain at the hospital from 9:00 in the evening to 8:30 the next morning. There were very powerful encounters with the Sacred during those times!

I released my third album titled Give Praise and Thanks in 2013, and finished CPE in 2014. My position at the parish switched from youth ministry to pastoral care. I began visiting shut-ins and the local nursing home…bringing Communion or simply having pastoral visits. The mystery to me was in figuring why I was called to write songs but then seemingly called to do the opposite…to sit with the sick and suffering and be a compassionate listener. I had another spiritual epiphany one night while at a Mass when the priest (who was a good friend of mine) gave his homily. He spoke of a young woman in his parish who had recently died but who had received much relief from a man who would drop by her hospital room with his guitar and sing to her. At that moment I “heard” a small voice say to me: “What if I asked you to sing for an audience of one?” Well…I thought…yeah…I could do that! I told my CPE supervisor and he made that part of my goals…to bring my guitar on my clinical visits. So that began my practice of bringing my guitar on my visits and sang my songs to those I ministered to.

My other role at the parish in overseeing the social justice programs, I also began taking part in Jail Ministry. That has become one of the most fulfilling ministries of all. Who would have thought back on that Friday afternoon in the first week of March in 1997 when I heard, “Get your guitar”, that all this would have happened? Not me!

I released my 4th album in 2017 titled, “Mercy Reigns”…which is mostly made up of songs spawned by my ministry to those who are ill or are hurting. And I’m also just about to publish my first book! It’ll be a devotional for an entire year titled, Mercy Reigns: A Daily Devotional of Compassion, Comfort and Healing. It came about through my blog in which I do scripture reflections each week day. I started that practice back in 2008 when I emailed reflections to my youth group. Eventually it turned into the blog. So instead of writing bad news like I did on the radio…I’m now writing Good News every day!

(Genie) I appreciate you sharing your story with us.  I love to hear peoples’ stories of finding their calling.

(Bill) I have a regular meditation practice which is very important. Each morning I do “Centering Prayer” for 20 minutes. Centering Prayer is a type of meditation done in the Christian tradition. I attempt to get in another session later in the day if I can. I also practice mindfulness…attempting to be present as much as possible.

Most people tend to be lost in their minds and their non-stop thoughts. It’s good to focus on what is happening each moment. Chaplaincy was very helpful in this area as we were trained in the “ministry of presence” or the “sacrament of the present moment” as it was termed by the Jesuit priest Jean-Pierre de Caussade who lived in the 1700’s. It’s good to remind myself that God is always present…so I must be present as well. My “monkey-mind” (as Richard Rohr has called it) needs to slow down and stop periodically. Listening to talks and reading books by Eckhart Tolle have been very helpful to me in this regard.

(Genie) Thank you for mentioning these specific teachers.  I think that will be helpful for our readers. Bob and I incorporate the teachings of Richard Rohr and Eckhart Tolle into our own practice.

Tell us about “Love Will Always Lead You Home.” This has to be my favorite. I listen to it often for its gentle message of grace and encouragement.

(Bill) “Love Will Always Lead You Home” is one of my favorites as well! I’m flattered that it means a lot to you. It reminds me of Psalm 23. We all “walk through the valley of darkness” more than once in our life-journeys. It’s the human condition. We all share that experience. My “dark valleys” have turned out to be paradoxically the most meaningful and transformative experiences of my life. Like Jonah…we have all experienced not wanting to do what deep down we know we are being called to do. We don’t want to move out of our comfort zones! But sometimes we need to experience helplessness and a lack of control…like being swallowed into the belly of a whale…to be directed to a place of transformation and new life. I have gone through this type of thing many times…especially when I had a ruptured appendix back in 1998. That’s when I had a Spiritually Transformative Experience (STE) in the hospital…when I knew…that I knew…that I knew…that God loved me exactly as I was…and that I didn’t have to earn it. I knew that Love was leading me…and that I had nothing to fear. Love would certainly lead me where I needed to go…and eventually safely home…back to the Love that created me. That’s my message for you, too!

(Genie) Thank you so much Bill.  Now, I want to leave our readers with Love Will Always Lead You Home.

Bill’s music including his most recent album, Mercy Reigns and Listen to Your Heart. You can see them by clicking on these album titles.

I am the Administrator of Espirational.com and the husband of Genie (Rogene) Robbins.We have been working on this Website for several years. We are wanting to get more response to our work so we are hoping this forum will get people to realize that Espirational.com is a place to get together and create a community of like-minded people seeking a spiritual union of peace and love. We hope you'll join us. View more posts